Our story began as West Michigan Laundry in 1963 when Gordon Van Tuinen moved from Grand Rapids to purchase the business. At that time, West Michigan Laundry served as a laundry and dry cleaner by processing personal clothing items. Gordon quickly began to expand into the commercial market with both uniform and linen rental. 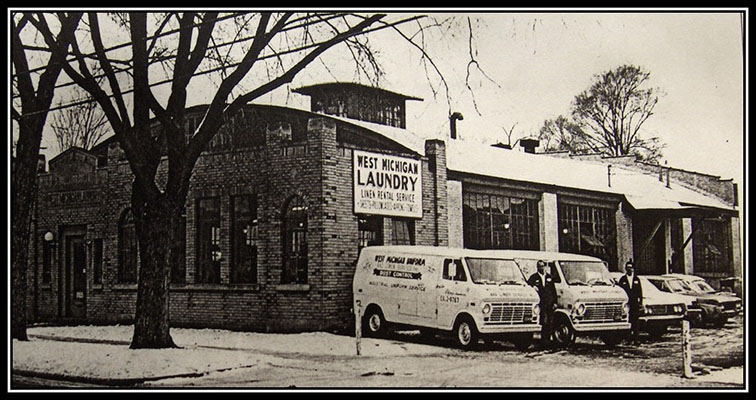 Gordon’s youngest son, Ken, joined the business in 1974 and led the company through a time of significant growth. An additional site was purchased in 1974 and the uniform division was moved, only to be moved back six years later when neighboring land became available for purchase and the main plant was expanded. In 1983, one of Ken’s older brothers, Tom, joined the business as a salesman which lead to further growth. Further additions occurred in 1984, 1989, and 1998 as surrounding businesses and property became available, bringing the main plant to its current 55,000 square foot layout. During the time of growth, Ken made the decision to begin narrowing the focus of the company on industrial which led to selling off the hotel linens in 1989 and eventually restaurant linens in 1997. Ken and Tom also realized there was a need to automate the washroom processes and invested $1.1 million in updated washers, dryers, and wastewater systems in 2000.

With Tom’s retirement in 2006 and Ken’s in 2010, the company leadership fully transitioned from the second to the third generation. Tom’s oldest son, Steven, joined the company as a route driver in 1990 and has served as the Vice President of Production since 2007. Tom’s younger son, Mitch, started at WM Uniform in 1994 as a route driver, eventually moving into sales and now serves as the Vice President of Sales. Ken’s son, Patrick, joined the business in 2004 as the office manager before taking over Ken’s role as President in 2010.

The third generation led the implementation of bar code labels on garments in 2008 and several significant capital investments in 2017. A new, smaller washroom was created and became part of a bulk cell where all the mats and towels are processed. At that same time, an auto-sort system, two new steam tunnels, and two new garment folding machines were installed to handle the continuing growth, bringing production back to only one shift and setting the company up for future growth. When the building across the street became available, it was purchased and now houses the embroidery & screen printing departments, stock room, and many offices. In 2019, the name was changed from West Michigan Uniform to WM Uniform and a new logo was created. This was due to the expansion of our service area and a desire for a more modern look. Today we serve over 2,000 businesses on a weekly basis on our 17 routes and process over 75,000 garments per week.